This is our second article featuring a pet with a disability, and like Lacie (the dog featured in the first story), Yogert needed to have both her eyes removed due to a painful condition called glaucoma. What follows is Rachel and Yogert’s brave story and remember, a life-altering diagnosis doesn’t mean your pet can’t live a happy and fulfilling life! Check out the article on Pet Assistive Devices  to learn about what’s available to help an animal with an impairment.

Rachel, how did you and Yogert meet?

I adopted Yogert from the Midwest Small Breed Rescue. I was looking on Petfinder.com in December, 2006 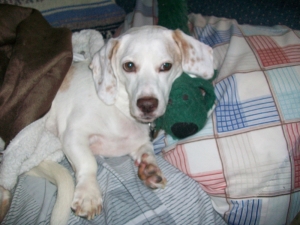 How old is Yogert? What breed? What is her personality like?

She is a girl and when I got her she was said to be a “beagle/basset mix” but I think now she is more Beagle/Dachshund by the way she has grown in shape (beagle ears but longer body, smallish legs and the chest bump that Dachshunds have.

She is super friendly and I call her “Wiggle Butt” as her butt and tail seem to always be moving.

What led up to Yogert needing surgery?

Nothing really, she was doing good, no major health issues at the time and I came home from work one day and noticed her eyes were closed and she was not the “wiggle butt” she usually is when I get home. I let her outside and it was clear she was not seeing. When I looked at her eyes, they did not look right at all.

I took her in that night and Dr. Clark was able to tell she had Glaucoma and explained how it is with dogs, just comes on in a very short amount of time. With her recommendation, we saw a specialist (Dr. Ramsey from The Animal Ophthalmology Center). He concurred with the diagnosis. It was really great that Dr. Clark was willing to work with  Dr. Ramsey regarding Yogert’s care, so we did not have to make the trip to Williamston for check-ups. I could just come into Ann Arbor Animal Hospital and get her corneal/eye pressure checked, then Dr. Clark would reach out to Dr. Ramsey and find out if [ophthalmic] drops needed to be adjusted and what the next step was.

We tried drops for a month or so, but the right eye did not improve so the best thing was to have it removed since she had no vision out of it and it was bugging out of her head, and had actually gotten scratched because of that.

The surgery was done (on the right eye) at Ann Arbor Animal Hospital and went well. We kept trying to save the left eye, using drops, but it was not working and she had no vision in that eye after a few weeks. We then made the decision to have the left eye removed; again, surgery went well, and because she’d not been visual for a while, it was not too much of a change for her.

What were your thoughts when considering surgery and are you glad you went through with it?

When the eye drops were not able to keep the eye pressure down, it was recommended to have the eye removed (hope was that we could save the left eye and keep the pressure under control).

I knew it was the best option as she was in pain and the eye drops were hard for her, and not working so she was not able to see anyway.

I was worried about how she would be after, but she has gotten right back in the game. Her butt does not wiggle as much but I think only because she is more cautious when walking around. Her hearing has taken the place of her vision. It seems like she can still see sometimes; it is crazy.

How has Yogert’s quality of life changed since the surgery?

She is doing great and as long as no one sneaks up on her, she is still friendly. I think she misses having her running fits through the house, but she still gets little run-ish fits sometimes. The main thing is that she is not in  pain any more. 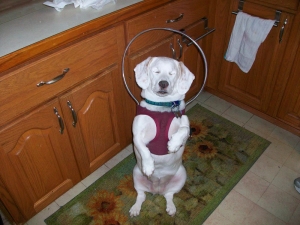 How does Yogert get around with the Halo device? Has she gotten used to it?

I don’t use the Halo at my house as it is sort of cumbersome. Yogert knows the layout and is good about not running into stuff, usually. But when over at my parent’s house, it is great. Stops her before she walks into walls, chairs, etc..

I have not really had her out in public so not sure how she will be with other dogs. As long as people announce themselves before petting her or trying to give her a treat, she does okay.

How has the Ann Arbor Animal Hospital helped you with Yogert’s care and specifically this surgery?

Everyone has been really helpful, as always. Assured me that the surgery was the best thing and she would feel a lot better after the surgery.

As mentioned above, Dr. Clark was kind enough to work with Dr. Ramsey for Yogert’s care, so I did not have to be the go-between. That took a lot of pressure off me, as I didn’t have the knowledge to correctly tell him or Dr. Clark what it was the other Dr. may have stated regarding Yogert’s status, possible changes, etc.

What is your hope for Yogert’s future?

I believe that she will continue to become more comfortable with not being able to see. And hope that she sticks around for a long time.

Her sister, Laydee, had some trouble at first too with the whole “event”.

She knew Yogert was not feeling well, so stayed back, but now that she is better I just have to watch that Yogert does not walk into Laydee or something, as that can cause a conflict. Although Laydee seems to give Yogert some slack when that happens… she won’t go right at her like before. She knows she cannot see, I think. 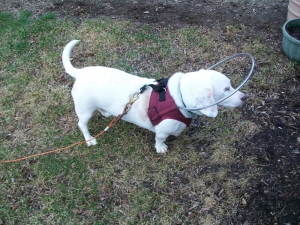 The Ann Arbor Animal Hospital would like to thank Rachel for allowing us to share her and Yogert’s story. We wish them many happy and healthy years to come!